【留学生より】Eventful Autumn and Winter in Japan

The first few weeks after I arrived in Japan in mid September were filled with traveling and exploring the bigger and well known cities of Japan such as Osaka, Kyoto, Nara and Tokyo. The moment I came to Fukushima was really exciting because I got to know not only a new city but also really kind-hearted people.

In the starting month of university, one is confronted with a lot of documents about course selection and matters such as residential status, bills concerning the international student dorm (kaikan) and general informations such as the right way of garbage disposal. With that in mind, your assigned buddy will lend you a hand in organizing and fulfilling the first assignments.

Fukushima City is located northern of Tokyo, which makes Fukushima City a perfect starting point for your travels in the northern region of Japan. For clubbing on the weekends, it is advised to either take the train to Tokyo or Sendai, because Fukushima does not have clubs. On the other hand, if you just want to go out and drink and talk with japanese people, there are plenty of welcoming bars.

The autumn brings a lot of different events such as the Samurai Festival in Shiroishi on the first of October and the lantern event in Fukushima City on the 9th of October. 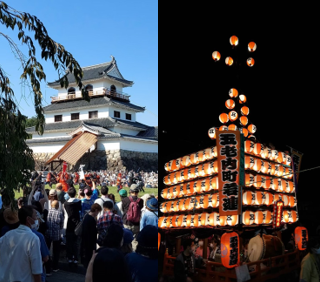 The end of October marked the time of Halloween and also let you enjoy a beautiful small event at an apple plantation outside of the city. Fukushima is also known for its delicious apples.

After spending the Halloween weekend in Tokyo, I was happy to return to the more quiet and calm region of Fukushima that I came to love by now. November started off with the rather spectacular Taimatsu Akashi Fire Festival in Sukagawa. It is a 420 years old traditional festival where 22 about 10 meter tall torches blaze in the night sky.
Unfortunately, this year, due to Corona, the festival was held on a smaller scale. Nevertheless, it was an astonishing experience. 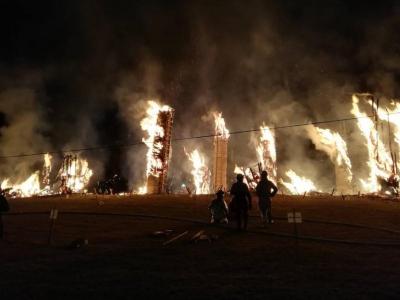 In addition, on this weekend, a cosplay event took place in Fukushima City with a special guest being the japanese Voice-Actress of Satoshi (Ash from Pokémon Anime).

Until the end of the year there were further events and field trips planned by the university such as the apple picking event or the trip to the coastal region of Fukushima to volunteer in a Festival in Namie.
As of the 4 months I have lived in Fukushima by now, I have experienced a lot of fun events and trips with friends I made here. I am looking forward to the next months and the upcoming events in spring and summer. I am really glad that I made the choice to come to Fukushima for my one year study in Japan.