It was my first time to go abroad, so I felt more anxious than I expected when I first decided to go to Turkey. Also, Turkey is not so familiar to me and it was the reason why I was worried. However, the two weeks in Turkey was very good. I think about it now, I do not know why I was worried to go to Turkey. I think that the two weeks in Turkey was very precious and wonderful days for me.

In this program, I visited three places: Antalya, Izmir and Istanbul. I would like to write about the events in Antalya and Izmir.

First, I would like to write about the events in Antalya. Antalya was the place where I lived abroad for the first time. Therefore, I was surprised a lot while living in Antalya. Among them, the environment of the bathroom was most surprising part this part this time. Although I did not mind it while I was in Turkey for a few days, I felt that Japan's bathroom environment was very good.  Also, I found the impression that vegetables and fruits were very tasty. I heard that overseas vegetables are not very tasty from people who have been to go abroad before, but Turkish vegetables and fruits were delicious. Some of the vegetables and fruits I ate in Turkey did not have seen in Japan, but they were very fresh and tasty.

▲At a historical remain in Antalya

Second, I would to write about the events in Izmir. There were also many surprises in Izmir. Among them, I was surprised at the speed of the car running on the road. I did not feel it much in Antalya, but I felt it many times as fast as the speed of the car in Izmir. In Japan, it often happens that cars stop for pedestrians, but that is only a rule in Japan. I thought that I can not use it in Turkey. Also, I felt it was very dangerous to try to cross the road in Turkey with that sense. In Japan, it is common that cars will stop for pedestrians, but I noticed that it is not commonplace. In addition, I had a speech in English at Ege University in Izmir. I was very nervous because I was the first time to give a speech in English. I could not make a satisfactory speech, but I think that it was a good opportunity to have a speech this time. Also, I think that it was a very valuable experience for me. 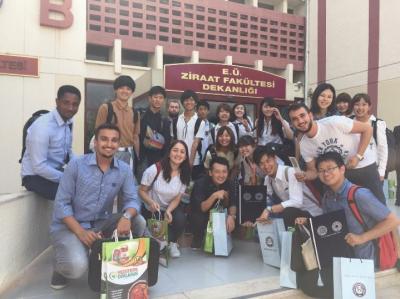 Finally, what I always felt through this program was the kindness of Turkish people. I went to Turkey with little knowledge of Turkish, so there were problems such as I did not understand what people were saying. However, a lot of people including Turkish students who spent time with us this time helped me. I really appreciate them. Also, even people I did not know were talking to me. Japanese people may be rare in Turkey, I was very happy to talk to so many people. I felt like being a famous in Turkey. This was a precious experience for me.

I think that I grew up having a lot of experience in Turkey. Also, I had lots of wonderful memories in Turkey. I will never forget this program. These two weeks were very fulfilling. If I have a chance, I would like to go to Turkey again.