I participated in the Turkey program for two weeks. I visited Turkey for the first time. This program was a good experience for me. The image I held to Turkey was the terrorism happened a few years ago. There are many people around me who have a negative image about Turkey due to terrorism. Many people were worried about me going to Turkey. However, as I learned through pre-learning, I realized that it was only seeing part of Turkey. Not all of Turkey is dangerous. I felt Turkey security check was stricter than Japan. There was a security check not only at the airport, but also at the entrance of the museum and historical buildings. I felt high awareness about safety. I thought that Turkey was a wonderful country.  Turkey is a bigger country than I thought. And Turkey has delicious food and beautiful nature.

I would like to explain what I experienced in Turkey. First is about agriculture which is the object of the program. I learned about agriculture for the first time. As for agriculture, I had a little knowledge and had trouble understanding. However, agriculture was very interesting for me. Turkey is a country where agriculture is popular.

Japanese companies are entering Turkey. The story of a familiar Japanese company was interesting. In research and development, it is said that it is sometimes cooperated with universities. It was good to know that it is working not only directly with farmers but also with universities. I felt that companies entering overseas had various perspectives.

Secondly is about meals. The food culture in Turkey was interesting. I could eat rice in Turkey too. However, it is different from Japan. Also, the taste of yogurt was different from Japan. Turkish yoghurt was a bit sour and tasty. Some also contained herbs. There are many Japanese yoghurts that are sweet and flavored with sugar in them. Turkish students said Japanese yogurt was too sweet. I thought the difference in seasoning was interesting. I was also surprised at the kind of cheese served to me. I was able to eat fresh and delicious vegetables in Turkey. I didn't expect to be able to eat cheap, fresh and tasty vegetables until I visited Turkey. Especially tasty were tomato and watermelon. And We drank Turkish tea everywhere in Turkey. Turkish tea seems to mean "welcome".  Turkish food is said to be the one of the third best known around the world. And Turkish food which suits Japanese taste as well. 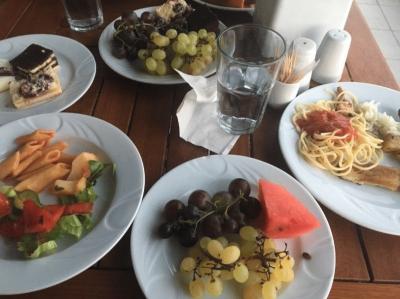 Thirdly about life in Turkey. Turkish students are very kind and friendly. They spoke to us a lot. But I could not reply well. I wasn't confident in my English. I feel sorry for being unable to talk. I don't forget this and want to learn English for communication in the future. I want to be able to communicate in English actively. They translated the menu of the restaurant. And they explained what was in. It also worked a lot for us. Even those who do not know will greet and smile. I thought it was a very friendly country.

In Turkey mostly did not go on schedule. Still it was strange that people were not impatient. In Japan I have been chased by time, so I thought that it is very nice to be able to spend time in this kind of patience.

Turkish are mostly Muslims. However, not everyone follows it in the same way. It seems that people are thinking about religion. Before going to Turkey, I thought everyone was eager to believe in religion. I understood that there are people of various ideas, and they are living together in a harmony. We visited a mosque named Ayasofya in Istanbul. It is now a mosque but it used to be a Christian cathedral in the past. It was marvelous that two religions were mixed. And as Muslims accounted for most, I felt the generosity to religion. I had a slight negative image of religion. I thought that I should not decide by image alone. I really realized that it is important to experience on my own. 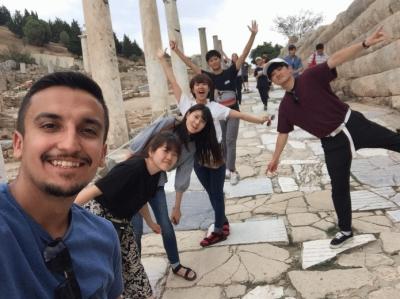 Finally I'm very pleased that I participated in this program. I am grateful to everyone involved in this program. We acted to make our program better. We will continue to interact with Turkish friends who promised to keep in touch. I would like to take care of my friend who got this program. The purpose of this program was to learn about agriculture. However, I was able to learn not only that but also a lot of things. Turkey is a country far from Japan, but there were many similarities. Turkey has plenty of attractive things. For example beautiful nature, many historic buildings, delicious food, kind people. I will never forget what I had experienced this time. I will make use of my experience in my experience. And I'd like to talk to friends and family about Turkey. And I would like to visit Turkey again.